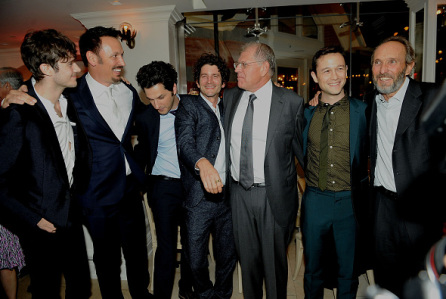 NEW YORK, NY - SEPTEMBER 26:Cesar Domboy, Steve Valentine, Ben Schwartz, Clement Sibony, Robert Zemeckis, Joseph Gordon-Levitt and Steve Starkey attend the 53rd New York Film festival opening night gala presentation and "The Walk" world premiere after party at Alice Tully Hall at Lincoln Center on September 26, 2015 in New York City. (Photo by Brad Barket/Getty Images) 53rd New York Film Festival - Opening Night Gala Presentation And "The Walk" World PremiereRobert Zemeckis’ The Walk got the 53rd annual New York Film Festival off to a roaring start with what I am told was a great reception with “rapturous applause” at Saturday night’s Gala Opening at Alice Tully Hall. This is not a surprise as the movie recounting French tightrope artist Philippe Petit’s incredible 1974 walk between the twin towers of the World Trade Center is not only about as thrilling as they come, but it also packs quite an emotional punch, particularly for New Yorkers who lived through 9/11 and have vivid memories of those towers as they once were. It was the ideal opener for NYFF, a film that exalts the wonder of movies in the same way another groundbreaking technical achievement full of humanity — Ang Lee’s Life Of Pi — did in 2012. That movie was a box-office word-of-mouth hit and a big player at the Oscars, winning four Academy Awards including Best Director. I expect The Walk, with a charming and awesome turn from Joseph Gordon-Levitt in the lead role, to emerge in a similar way, both with audiences and perhaps Oscar voters, too.

Related ’The Walk’ Review: Robert Zemeckis Renews Your Faith In The Wonder Of Movies

Zemeckis has found a way, on a relatively modest budget (reportedly around $35 million) to dazzle us once again. The visual effects in the film’s last half are the best I have seen all year. I saw this movie in Imax 3D (at NYFF it was presented in Real D 3D) at a very small early screening at the new Imax headquarters one month ago and it became the first film this year that had the “wow” factor I so rarely get these days. It was simply awe-inspiring to watch, and it is still with me even after seeing dozens of films at Telluride and Toronto since then. Coming in succession with two other highly impressive major studio entertainments, Everest and The Martian, I can only say studios this fall are rediscovering that old fashioned formula to make great big movie adventures without resorting to comic book superheroes for a change. Hallelujah. My full video/print review will run on Tuesday, in advance of The Walk’s limited 3D/Imax openings, which Sony begins on September 30 before going wide on October 9, a similar pattern to what Universal just did with another 3D/Imax juggernaut, Everest. With Saturday’s successful NYFF launch of The Walk, as well as a record opening for animated hit Hotel Transylvania 2, it looks like good times could be coming back to the Culver City studio after last year’s devastating hack attack. 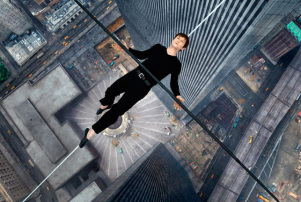 After this great New York-centric opener, NYFF has also cherry-picked some other very NY-friendly movies from the festival circuit, including Carol and Brooklyn, two movies that feature major characters working in a New York department store and finding love on the side — albeit in very different ways. Carol, which stars Cate Blanchett as a wealthy woman who seduces store clerk Rooney Mara, made big waves at Cannes in May and won Mara the Best Actress prize. It also the-walk-joseph-gordon-levittplayed Telluride, and The Weinstein Company is hoping its NYFF launch will further the buzz in advance of a November 20 carolopening.

Fox Searchlight’s lilting and beautiful Brooklyn stars Saoirse Ronan as a young Irish girl who comes to Brooklyn and gets involved in a romantic relationship that dramatically changes her life. It debuted at Sundance, where it quickly sold, played Toronto, and now also hopes to get a hometown boost from NYFF in advance of its November 6 release. Both films feature strong Oscar possibilities for their leading ladies.

Be creative with an innovative tracking solution. Get to Know More About Us.